Bad Conscience and the Birth of the Sovereign Individual 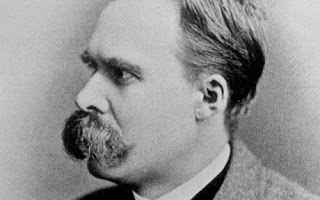 Friedrich Nietzsche’s “On the Genealogy of Morality” includes his theory on man’s development of “bad conscience.” Nietzsche believes that when transitioning from a free-roaming individual to a member of a community, man had to suppress his “will to power,” his natural “instinct of freedom”(Nietzsche 59). The governing community threatened its members with punishment for violation of its laws, its “morality of custom,” thereby creating a uniform and predictable man (36). With fear of punishment curtailing his behavior, man was no longer allowed the freedom to indulge his every instinct. He turned his aggressive “will” inward, became ashamed of his natural animal instincts, judged himself as inherently evil, and developed a bad conscience (46). Throughout the work, Nietzsche uses decidedly negative terms to describe “bad conscience,” calling it ugly (59), a sickness (60), or an illness (56); leading some to assume that he views “bad conscience” as a bad thing. However, Nietzsche hints at a different view when calling bad conscience a “sickness rather like pregnancy” (60). This analogy equates the pain and suffering of a pregnant woman to the suffering of man when his instincts are repressed. Therefore, just as the pain of pregnancy gives birth to something joyful, Nietzsche’s analogy implies that the negative state of bad conscience may also “give birth” to something positive. Nietzsche hopes for the birth of the “sovereign individual” – a man who is autonomous, not indebted to the morality of custom, and who has regained his free will. An examination of Nietzsche’s theory on the evolution of man’s bad conscience will reveal: even though bad conscience has caused man to turn against himself and has resulted in the stagnation of his will, Nietzsche views it’s development as a necessary step in man’s progression towards becoming the sovereign individual.

Man’s development of “bad conscience” is a complicated process that sees its beginnings in slave morality’s doubling of the doer and the deed. According to Nietzsche, the slave (the weaker man) developed ressentiment towards the noble (the stronger man), labeled the noble as “evil” and blamed him for causing the slave’s suffering (20-22). The slave separated the noble (the doer) from his instinctive actions (the deeds) and claimed the noble possessed “free will;” the slave believed “the strong are free to be weak” (26). The slave set up the ideal of his own weak and passive instincts being “good” and the strong and active instincts of the noble being “evil” (26-27). As stated by JHarden, when defining his weakness as good, “the slave turned [his] natural condition of suffering at the hands of others into a condition which should be desired” (JHarden). As religions developed and slave morality became dominant, this ideal of “good” and “evil” prevailed and forced man to become conscious of his instincts as separate from himself, something he could control.

In Nietzsche’s account, the original free-roaming man lacked memory. To be happy and to not hold on to the pain of unpleasant memories, man possessed an “active ability” to forget (Nietzsche 36). Man’s memory developed as he formed relationships and began making promises to repay debts to creditors. He had to remember to repay on time or face the pain of punishment – a pain that the creditor of this relationship took pleasure in producing (40-41). As communities developed, man now owed his debt to society (46). Fearing punishment for his sins against society’s “morality of custom” (36) resulted in man becoming predictable and tame as he was forced to relinquish the freedom of acting on his instincts (36, 59). Additionally, with society now regulating punishment, man (as creditor) was also denied his instinctual pleasure of inflicting pain on his debtor. Nietzsche states, “All instincts which are not discharged outwardly turn inwards” (57). With his aggressive drive forcibly restrained within society, man turned his outward drive inwards, felt ashamed of his animal instincts, received a perverse pleasure in his own pain, and developed the “illness” of bad conscience (59).

Nietzsche views the development of bad conscience as a stage in man’s progression towards becoming the “sovereign individual.” Although he states that man’s break with his “animal past” is both a step forward and a decline into a terrible condition (57) – the suffering of “man against man,” Nietzsche offers that “man” is not the telos of this battle, but only “a bridge” to something greater (58). He asserts that progress to a goal can be measured in sacrifice and “man’s sacrifice en bloc to the prosperity of one single stronger species of man – that would be progress” (52). Throughout Nietzsche’s essay, he addresses the cost of the sacrifices made when man broke with his “animal past” (57) to become the tamed man of society. Nietzsche notes that whenever an ideal is created: reality is misunderstood, lies are endorsed, and conscience is disturbed (65). In relation to the ideal of the civilized man, he seems to be referring to the reality of morals, the lies of religion, and the conscience of man. As long as man continues to view his animal instincts with a scornful eye, he will remain predictable and tame and will deny himself his full potential. In order to progress, Nietzsche asserts that man must destroy the “shrine” of man as sinner (66). He must destroy the ideals that say “no” to life. This would be the autonomous “sovereign individual;” a man who has learned to keep his promise within society, has turned inwards and examined his own morals, and can now rise above the “morality of custom.’ He is his own master, one who is responsible to himself and does not require the control of the governing society to ensure he keeps his promise. According to Nietzsche, this is the telos of man imprisoned by society’s “morality of custom.”

Some read Nietzsche’s essays and conclude that not only did he view man’s bad conscience as a negative development, but also that he held slave morality as a whole to be damaging. Nietzsche does present some harsh criticism of slave morality, but also notes that man first became interesting upon its arrival. Their resentment of the nobles produced an internal struggle for the slaves and created the hitherto unknown concept of “evil.” Christianity and the entrance of the priestly caste turned the outward hate of slave morality inwards and deepened the slave’s soul, giving him a depth lacking in the self-contentment of noble morality (16). The slave’s lack of outward power led him to direct his power inwards, resulting in man’s first exploration of his inner life.

While critical of the attitude of ressentiment found in slave morality, Nietzsche includes it as an important factor contributing to the bad conscience of man. And even though Nietzsche dislikes the negative results of bad conscience – man’s suppression of his instincts, hate for himself, and stagnation of his will – Nietzsche does value it for the promise it holds. Nietzsche foresees a time coming when man conquers his inner battle and regains his “instinct of freedom.” In anticipation of that day’s eventual arrival, Nietzsche views the development of bad conscience as a necessary step in man’s transformation into the “sovereign individual.”

Nietzsche, Friedrich. On the Genealogy of Morality. Ed. Keith Ansell-Pearson.