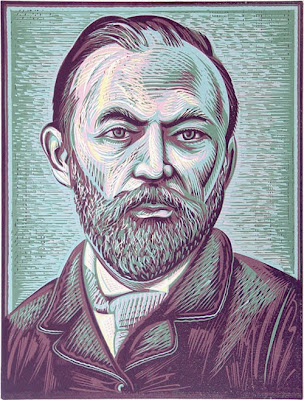 Written by Thomas Hardy just prior to World War I, “Channel Firing” clearly expresses Hardy’s opinion that war is pointless, as well as his fear that man will never change – never learn from history. Hardy’s poem employs a simple rhyming structure and a casual, conversational manner to tell the story of dead men buried in a church that wake one night to the sounds of gunfire and think judgment day has arrived. God speaks to the dead men to assure them that it’s not judgment day, it’s only mankind preparing for war by firing guns in the channel. Instead of writing in a dire and depressing manner, which may limit the potential audience for a poem, Hardy employs dark humor and structures the poem in a way that makes it not only easy to read, but entertaining as well. Hardy’s serious message concerning the futility of war becomes accessible to a wide audience through his use of an easy rhyme, a simple narrative structure with informal language, and by way of his framing the story in a humorous manner.

“Channel Firing” is written in an uncomplicated iambic tetrameter with an ABAB rhyming pattern where the first and third lines rhyme as well as the second and fourth lines. This provides the poem with a steady and consistent rhythm, giving it a nice lyrical quality and making it very easy to read. The poem is a simple narrative, telling a story through descriptive action and character dialogue, and utilizes uncomplicated sentence structure with proper punctuation to plainly communicate the action and conversation of the narrative. The poem could be called a dramatic monologue since its skeleton narrator tells his and his neighboring dead’s story by addressing the living. This is evident in the first lines’ use of your and we: “The night your great guns, unawares, / Shook all our coffins as we lay” (1-2). Also evident in these opening lines, Hardy’s word choice is simple and informal and results in creating a relaxed conversational tone to the language that is both relatable and easily understood by the casual reader. Even the voice of God is given unadorned, informal speech; no “thou” or “thee” are to be found in his words. For example, God tells the awakened dead, “Just as before you went below; / The world is as it used to be” (11-12). The poem’s structure and language approximate that of a nursery rhyme, allowing its message to be easily accessible to the common man -- the same common man who may never have truly examined the futility of war.

Hardy’s decidedly comic framing of the narrative creates an almost lighthearted feel that contrasts with his serious message about the madness of mankind in their pursuit of war. Starting with the poem’s first bit of action, a loud noise that literally “wakes the dead,” Hardy shirks realism in favor of a comically absurd, macabre story. Images of skeletons sitting upright in their graves, of a mad and “drooling” cow, and of a wisecracking God provide ample dark humor to the poem. God’s remarks are indeed witty; he comments on how nations at war do no more for his sake (Christian love) than for the dead who are “helpless in such matters” (16) and that the warring men should be grateful that it’s not judgment day since his punishment for them would indeed be harsh. Humor is also found in the dead preacher’s remarks. He says he wasted his life preaching, since his parishioners learned nothing, and wishes he’d “stuck to pipes and beer” (32). The skeletons in their graves, and God himself, mock and laugh at the ignorance of man.

Yet within the comic images and witty remarks of “Channel Firing,” Hardy encloses his decidedly serious message of war being pointless. And with the final stanza, Hardy adopts a noticeably more somber approach, exploiting a sudden shift in tone to powerfully convey his fear that man may never learn from their savage history.

Again the guns disturbed the hour,

Roaring their readiness to avenge,

As far inland as Stourton Tower,

The legendary civilizations of Stourton Tower, Camelot, and Stonehenge invoke three different periods in England’s history – one real, one mythical, and one mysterious – that appeal for a contemplation of war and its role in England’s history and national identity. Hardy seems to ask what cost is England willing to pay if it continues to avenge its national honor with deadly war in order to maintain its supposed heroic identity.

In conclusion, with Hardy’s choice of a simple structure and easy rhyme and his selection of a witty and darkly comic narrative filled with ghoulish imagery, “Channel Firing” becomes accessible to a wide and diverse audience. Hardy masterfully uses absurd and somewhat grisly humor to convey the poem’s serious and deeply felt message and, in doing so, creates a poem that is both entertaining and enlightening.