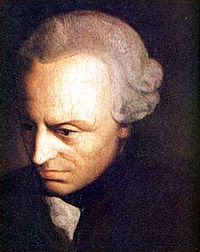 Immanuel Kant’s doctrine of transcendental idealism contends that all we can know about external things lies in their appearances as they are presented to us and affect our sensibility. Initially, this may seem to be the same principle found in traditional idealism. However, unlike traditional idealists, Kant does not deny the existence of the external things. He believes that these objects are indeed real. However, we cannot know anything about their existence independent of us, how they may truly be in themselves; we can only know about their appearances, which are represented in us . The heart of the difference between Kant’s transcendental idealism and the traditional idealism of George Berkeley can be found in their opinion of space and time. Berkeley groups space in with experience. He considers it to be purely empirical, existing only in the world we perceive and known to us purely through experience . Kant, on the other hand, ascribes space and time to be a priori forms of pure intuition that lie inside of us, which allow for our perception of things, thereby creating their appearances . By first understanding Kant’s proof of space and time being a priori intuitions and how they relate to his distinction between appearances and things in themselves, we can proceed to contrast his views with those of Berkeley. When understanding their contrasting philosophies, it becomes clear that Kant’s transcendental idealism not only opposes Berkeley’s traditional idealism, but also, in the words of Kant, turns out to be its “proper antidote” (Kant 44).

Kant maintains that space and time are a priori intuitions that we possess and bring to objects to make their appearances possible (Kant 35). Space is not a part of the external object, but is a property of our intuition that allows for the possibility of perceiving appearances of objects outside us. It is this possession of “space in thought” that gives physical form to the external objects (Kant 39). Kant persuasively uses mathematics to prove space and time as being a priori forms of our sensibility that make empirical knowledge possible. Giving the spatial example of a line drawn to infinity, Kant correctly argues that this can exist only in our intuition and cannot be conclusively proven through experience (Kant 36). Kant claims that all mathematical concepts are first arrived at in intuition by use of space and time; spatial intuition allows for geometry, while temporal intuition forms arithmetic and its use of units (Kant 34-35). Furthermore, by adding new concepts, these a priori mathematical propositions can be amplified to become what Kant describes as synthetic a priori judgments. Giving the example of 7 + 5 = 12, the concept of 12 is not present in 7 + 5 but arrives through the use of intuition. The resulting 12 can also be proven empirically through the counting of objects (Kant 18-19). As Jon Perri concludes, Kant proves “that not only can we know something and synthesize new knowledge about it, but we can also see it demonstrated empirically” .

In Kant’s epistemology, cognition of the outside world is only made intelligible to us through intuition and how the objects of our perception affect us through our senses. Our understanding then applies thought and creates concepts, forming representations of the objects (Kant 156). He adamantly states, “our sensory representation is by no means a representation of things in themselves, but only of the way in which they appear to us” (Kant 38). What we know in experience, empirical knowledge, belongs merely to the sensible world of appearances. We cannot truly know the “thing in itself” as it really is since it is independent of our experience; we can only know about its appearance. However, Kant does believe we can gain some truth from appearances, but only as they relate to experience; any transcendent knowledge that reaches beyond the “boundaries of experience” is illusory (Kant 44).

According to Kant, traditional idealists like Berkeley, believing space to be cognized only through experience and perception, relegate appearances and experience to mere illusion since they do not see anything a priori related to them (Kant 126). They argue that nothing truly exists except for “thinking beings” and everything else are only mere appearances that have no true corresponding objects outside of the “thinking being” (Kant 40). However, when establishing space and time as a priori forms of our intuitions, Kant discovers that objects outside of the “thinking being” can correspond to inner concepts. The object’s representation affects our senses and we can identify it outside of us. It remains “unknown to us [as it is in itself] but is nonetheless real” (Kant 40). Kant cannot deny the existence of the corresponding objects, the things in themselves, for they underlie the appearances formed by intuitions of space and time. Therefore, the thing in itself “is not nullified, as with idealism, but is only shown through the senses [that] we cannot cognize it at all as it is in itself” (Kant 41). Berkeley’s subjective idealism gives truth only to the “thinking being” but denies any truth in experience, a very pessimistic and restricted view of life. Kant’s transcendental idealism stands in opposition and provides the optimistic “antidote” to traditional idealism by giving truth to experience.

Some have argued that Kant neglected to consider a third alternative regarding the properties of space and time, namely, that they belong both to our subjective intuition and to the objective reality of the things in themselves . However, when adhering to Kant’s epistemology concerning external things, it would be impossible to prove the properties of space and time in the things in themselves given that they exist outside our “boundaries of experience.” Even if external things do share space and time, could a priori knowledge of these objective properties be proven? Isn’t it this a priori knowledge that is required? When using mathematics as clear evidence, Kant was able to prove that space and time are part of our intuition. The examination of their properties belonging to both subjective intuition and to external objects could be a possibility (something for future philosophers to tackle), but it does not unconditionally nullify Kant’s doctrines.

In conclusion, with his doctrine of transcendental idealism, Kant was able to establish that our cognition of external objects is dependent on our a priori intuitions of space and time. We bring this “space in thought” to external objects and give them form, creating the appearances of them that lead to empirical knowledge. Even though we can only have knowledge of their appearances and can never know the ‘things in themselves,” the objects are indeed real given that they underlie their appearances and correspond to our concepts of them. This distinction, that the objects underlying the appearances do exist, opposes the pure illusory nature of appearances in traditional idealism and provides its “antidote” by allowing for truth in experience.

Kant, Immanuel. Prolegomena to Any Future Metaphysics With Selections fron the

Perri, Jon. "Mathematics as a Response to Empricism" Weblog post. Revolutions in